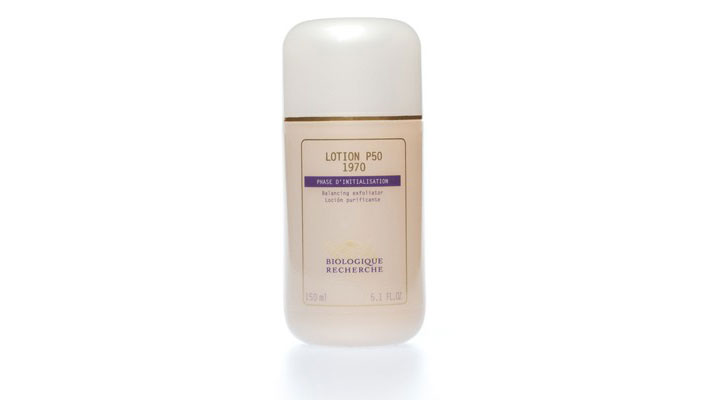 My friend V. has such amazing skin she looks backlit. Even tone, no discernible pores and a radiance I’ve only ever seen achieved with airbrushing. When she told me that she swears by a toner called p50, from a legendary French company called Biologique Recherche, I ran to do my research.

p50 has been a cult beauty product for decades in Europe and has been quite the sleeper product among skin care gurus here in the United States. Turns out Mary Kate and Ashley Olsen are obsessed with the brand, too. Im almost ashamed I didn’t know about it. 😬

After road-testing p50 for two months, I can attest to its power. I definitely saw a boost in radiance almost immediately. My t-zone was more balanced and the dry patches that began to plague me this harsh winter were eradicated. I even think my pores look smaller.

p50 uses a combination of lactic, salicylic acids, glycolic acids and sulfur, among other key ingredients like onion and horseradish extract to exfoliate, hydrate and balance the skin’s pH, which is crucial for healthy cell turn over. Use it after cleansing and before your other skincare.

I should warn you: p50 has a strong odor. My husband says I smell like an anatomy lab after I use it, but I think the scent leans more toward auto fluid. Also, it mildly stings when you apply it, but I promise—both the smell and the stinging dissipate in minutes.

p50 is hard to find in the U.S, but it’s always well stocked at Rescue Spa. It comes in three formulations—I recommend the original p50 over p50V (for sensitive skin) or p50W (for mature skin).

As we head into Spring, I think p50 is a great way to renew your complexion. Let me know what you think!