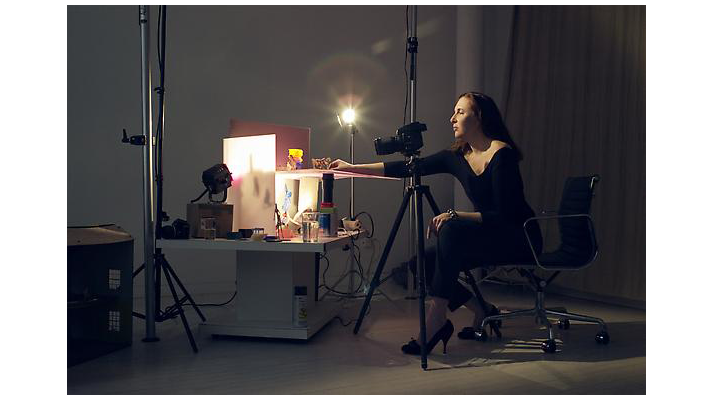 Lena is very open about the great love and admiration she has for her artist mother, Laurie Simmons. In fact, Dunham’s first film, Tiny Furniture, the one that caught the eye of Judd Apatow and lead to her HBO Girls’ series, featured her mother and her highly regarded dollhouse photography. Simmons was one of the pioneers of “set-up” photography in the 1970s and is quite famous in her own right.  I think it’s fair to say that to one generation, Lena Dunham is “Laurie Simmons’ daughter,” as much as Laurie Simmons is “Lena Dunham’s mother” to another.  At the heart of Tiny Furniture, though, is really a story about mothers and daughters.

I went downtown to the Lower East Side to look at Laurie Simmons’ latest photography series, Kigurumi, Dollers and How We See. It is an exploration of a Japanese art form called Kigurumi and its sub-culture of performers called “dollers.” Dollers wear head-to-toe latex body suits to dress up as their doll-like characters and are known for wholly becoming their doller identities. Simmons became fascinated by Kigurumi and how the costumes, as tight and uncomfortable as they are, might actually be freeing. So she got some Kigurumi costumes made, brought a few girls together in the country in Connecticut, and staged them like dolls in an abandoned house.

What do you think? 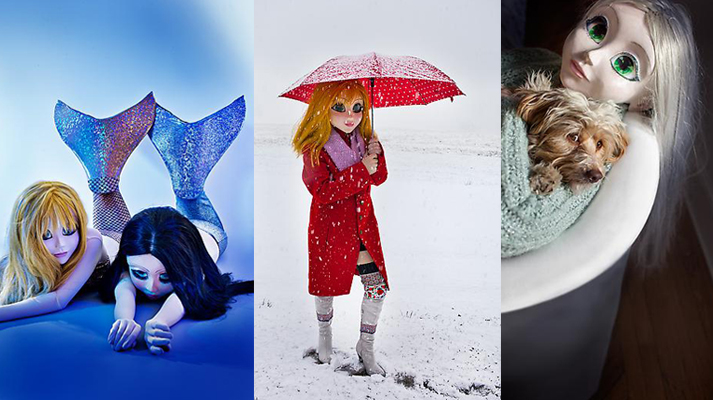 My first thought was “creepy.” Those big eyes. (Which, by the way, are impossible to see through. Doller’s have to be led around by hand.) Then I thought, serenity. Beauty, even. Is there peace in hiding yet feeling the freedom to express yourself? I was struck by how a doller can feel so fragile—blind, constricted to move, yet also feel so bold. Yes, I can see  how being so masked could be empowering.

I was curious about the exhibit as a writer because it explores beauty and self-image and the idea of “masking” oneself. These are themes I’m fascinated by and are surely relevant to BeautyMama—how women might feel about cosmetics, for sure. That putting on a “mask” can affect our personality.

But I was also interested in seeing the exhibit as a mother. I am in awe of Lena Dunham, by her talent and capacity and depth at such a young age. I am in awe of her self-confidence and her bravery. Her resilience in the face of criticism. I love her humor. And her ability to so deftly capture the nuance of relationships astounds me.

I wondered if I could learn anything about how a girl like Lena got made. What did she see growing up? What did her mother think about?

One aspect of How We See speaks to the heart of Simmons’ work: what is real and what is constructed? How do we see? Simmons’ dollers look like dolls in doll houses. The photos are double life-size. Are they people or are they dolls? Simmons’ art begs questions as much as it makes statements. Lena’s work aims to do this, too, but I think the similarities end there—while Lena’s work is so much about the flesh, her mother’s is all about plastic. As New York City artist Viviane Silvera, of VS On Art,  points out, “Laurie Simmons’ work is actually more shocking but she doesn’t expose herself the way Lena does.”

It’s all so interesting to think about, isn’t it? I keep wondering how any of this applies to motherhood. Do you think Laurie Simmons taught Lena to see that life is full of illusions—of beauty, of ideals, of truth? Maybe she wanted her to understand that we all see differently and encouraged her daughter not to waste time trying to appeal to someone else’s vision—of her body, her face or her art.

I may not be an artist, but all this did make me think about the “statements” I’m making to my own  girls. About the “masks” I take on and off. I’d love to know your thoughts.