02 .25 .15 The BeautyMama Interview: Tovah Klein on Building Confidence in Kids 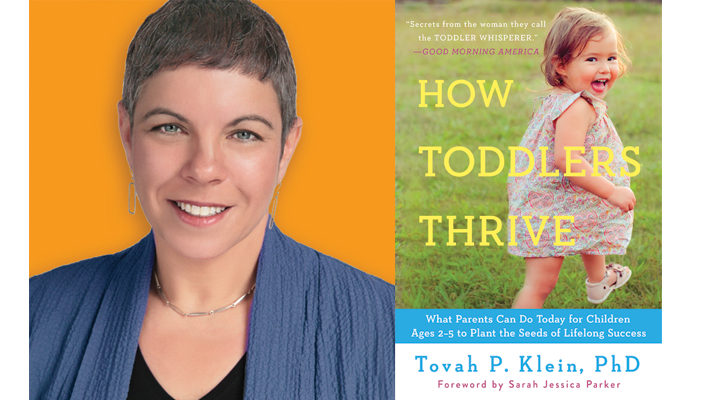 The other day my two year old went into the coat closet, took out a floral raincoat and proceeded to have a full-body struggle to get it on. She didn’t know I was peeking at her through the door. I watched her scan her coats—from a navy lightweight down jacket, through colorful vests, to the thick padded polka dot number with a furry hood that would have been the appropriate choice for the arctic weather.

She came running to me, arms up in the air with a giant grin on her face—clearly so proud of not only her self-dressing accomplishment, but of her particular choice of coat.

If I hadn’t just finished reading Tovah Klein’s eye-opening book How Toddler’s Thrive:What Parents Can Do Today for Children Ages 2-5 to Plant the Seeds of Lifelong Success, after praising her for getting it on, I would have gently explained that the raincoat wasn’t the right jacket for the day and helped her change.

But I let her wear the raincoat.

I just layered a warm vest over it. I didn’t worry about being judged as a mother for improperly dressing her toddler in NYC in the heart of winter. I didn’t worry that my daughter looked a little kooky and mismatched. Why? Because I had just validated my toddler in a very big way. And she felt great about herself. She showed her jacket to her teachers in class and she kept it on, with pride, all day.

Helping our children feel good about themselves is the foundation for their success in so many ways. We use the word confidence so freely—we want our kids to feel “confident.”  But what does real confidence look like?

Hint: it has nothing to do with looks.

In her book,Tovah Klein gets to the heart of confidence building—and it starts early. Before the age of two. Backed by science and 25 years as the director of the Barnard Center for Toddler Development, Klein, an associate professor of psychology (and a developmental advisor for Sesame Street) gives an eye-opening look into the world from your child’s perspective and how you can harness that vantage point to be a better parent and build lasting self-esteem.

I was thrilled to be able to talk to Tovah about these issues so close to the heart of BeautyMama’s mission. I gained some invaluable tools on how to help my girls feel good about themselves—in a lasting, core way. And that makes me feel good.

Who is that toddler in the mirror?

Children first develop a sense of self around 15-18 months. This is usually when they start saying “no” a lot. They start demanding no diaper change. They start realizing, ‘Hey, I’m my own person’ but it’s not fully formed. By 2-3, they have a stronger sense that they’re a person separate from Mom and Dad and that they have their own ideas.

When kids start realizing they have their own ideas, it can come off as controlling. They’re realizing they can want something different than what you want. I’m my own person and I only want blue pants today. It’s not linked with a social consciousness at this point, they’re really figuring out who am I and what do I want? That initial who am I comes with separation and is supported by the parents—“You want blue pants today? Cool. Because I value you for you.”  I can always tell the children who dress themselves because it makes them feel good, as in, “I picked this. This is me.”

By giving them confidence in their decision making and desires, we are instilling in them a sense that they’re O.K….so that on a not so great day when they’re melting down and you’re not having a great parenting day, you can say, “That was a rough day. Mommy yelled and you were so upset…and I still love you.” That’s where they get a sense that they’re going to be alright in the world. So the clothing choice— it’s not a focus on their looks, it’s really about something else.

Our whole center, where we have toddler classes has mirrors (because it’s a one-way observation mirror) and the children practice faces and emotions for fun all the time…they’re really trying it on in terms of learning their emotions. The feedback they get is, all of that is me. That happy, sad, or ferocious face— you can be all these things and that’s who you are.. There’s a lot of practicing and mimicry.  Thats the first step of getting to know “me.”

Don’t Panic If Your Son Wants To Wear Nail Polish

One of my children went through a period where he would put makeup on with me in the morning. Most people think it’s a girl thing, but he didn’t know that. He would want nail polish and his favorite color was, still is, blue, so he had blue nail polish. (Until he got all the messages from other people that boys don’t wear nail polish.) Kids like to live in the adult world. Little girls really like to put on makeup because that’s what the adults of their sex do. I think if you battle children, and you say no, no, no, you can’t wear nail polish, and they’re looking around and seeing people wearing nail polish, they wonder why it’s being banned. It becomes even more interesting. They imitate us. They’ll paint their nails with magic markers, girls and boys. Kids are practicing to be grownups all the time—when they try to sweep with a broom or carry a briefcase and “go to work.” If you see it all in this context, it’s not such a negative thing.

‘Pretty’ is only part of it

We all want for our children to grow up confident in who they are, and who they are is a complex being—there’s what they think about, their range of emotions, their desires—and physical appearance is a part that. We live in a very physically orientated world, right or wrong. I’m not saying it’s right for sure. What we can really do is help our children feel good no matter who they are, what they feel, or what they look like. And you do that by loving them in all their complexity.  Looks are just a part of it. When we tell our children all of the things we love them for—I love you because you’re funny, I love you because you cry sometimes, I love you because you love to do math, when you put your favorite dress on—you’re saying these are all parts of you and I love all of them.

Why Loving Kids When They’re Bad Is Good

Children are “bad” sometimes, and their biggest fear is being “found out.” What if you find out that I really hated you today when I was so angry when I had to be quiet….would you still love me? What I see and what concerns me—is children being ashamed of what they’re feeling. For example, even something as simple as “You don’t need to cry when I take you to school,” really says to the child, it’s not okay that you feel that way. Kids are so fragile and undeveloped at this age, they have so many feelings…and you want them to feel ok no matter what they feel. To understand, I can’t necessarily hit you…but I can feel like I want to—I can own that feeling and have it. Their emotional life is so fragile at this age…. we need to respect that they’re really very little and need us to accept their full range of behaviors and feelings. Giving them the base that says, I get that you’re good sometimes, I get that you’re bad sometimes, you’re happy sometimes, you’re sad sometimes—and I love you for all of it is really where there base comes from. Helping them feel like, Hey, I’m okay in the world.

Pretty Is As Pretty Does

When parents are approaching a child telling them how beautiful and pretty they are– and then how un-pretty they are when they’re wearing outfits they don’t like or when they didn’t take a bath, they get very clear messages that in order to be loved or accepted, they need to be beautiful. I think it’s different when it comes from the child—when they’re putting on dress up clothes and ask “Am I beautiful in this?” and the parent smiles and says “sure you are.” If beauty is emphasized in your house as being important, or there’s a lot of focus on clothing, it’s going to be picked up by children.

What To Say When Your Daughter Hates Her Hair

It’s probably because she feels different. For example, ringlet curls are touched and commented upon. When a child gets undo attention for something that’s different or highly noticeable, even if it’s positive, they can get very self conscious. All of my children happen to have blue eyes and very long lashes. One day one of my sons said to me, “I don’t like my eyes.” It wasn’t that he really didn’t like his eyes. He didn’t like the attention. You might say, “Not everyone has curly hair and so I can see that you don’t want that attention, but some people think curly hair is beautiful.” You can also let her know that you think her hair is beautiful.

Food, diet, being thin…we tend to over talk these things out of our own anxieties. For example, if you were a fat kid and now you have a chubby three year old and you’re worried that they’re going to be a fat teenager, you may be putting messages out there… as opposed to just serving some good foods, knowing that kids go through phases where they sometimes eat more, sometimes eat less. Sometimes they’re heavier, sometimes they’re not. Kids don’t naturally know thin is in and fat is out. The issue of body size and weight—if very young children are conscious of it, it’s coming from the home and what they hear or see around them, such as ads. If there’s a lot of talk about food, a lot of talk about dieting, being fat, that’s going to make children very conscious of it in a way they would not be if it wasn’t being talked about.

The main thing is in these early years is that parents can have a really positive influence on their children and you do that by truly for loving them for who they are and not trying to make them be something else. If you have that kid who only wants to play with trains all day long and you keep telling other people you’re frustrated that he only wants to do the same thing all the time, that’s what the child hears and he starts to feel bad for having this desire. We’re kind of in a hyper-anxiety parenting world right now—but if we can relax a little bit and really let children know they’re being loved for who they are, they’re going to have a firm base and they will need that base to get through the peer pressure and billboard pressures that come throughout their life. If what they’re getting at home—what they’re seeing, what they’re feeling— is really counter to the billboards and outside messaging, if they feel like, I’m accepted at home for who I am, that is what counts. It can’t take away the influence of billboards, but it will greatly minimize the influence.

Tovah Klein’s book may be purchased here on Amazon.

I’m also giving away copies of How Toddlers Thrive on my Facebook page.